Vital Debate: Were Charlton right to cancel this transfer deal? 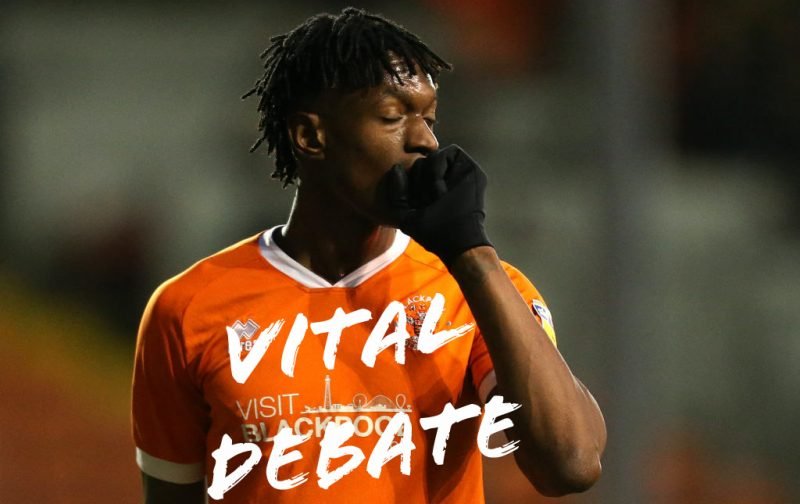 There has been much talk going around about Blackpool’s Armand Gnanduillet as the French striker has scored 12 goals in this last 22 appearances for The Tangerines sparking many clubs to be after the 6 foot 4 target man.

Yesterday it was reported that Charlton have pulled out of the deal after agreeing £325k in the summer, but six months down the line Blackpool want £500k more than originally planned due to his surge in goals this season, but he has just six months left to run on his contract, so were Charlton right to cancel this deal?

When new owners come in your always going to get clubs trying to test the waters with the structure at the club, Blackpool were right to ask for more I’m not going to deny that as Gnanduillet is a completely different player to what he was last season, but Charlton were also right to pull out of the deal, which now makes us look slightly harder to deal with in the transfer window which is obviously a good thing.

The money will not be spent left right and centre and we can see that now because if ESI were reckless we would have Gnanduillet in the door right now and it might not have worked out, obviously he is not worth £825k to Bowyer, Gallen or Southall.

On Twitter we asked the fans what they think of the decision made by Charlton and here is what you all had to say.

JOIN THE DISCUSSION IN THE VITAL CHARLTON FORUMS!

Good business, say no to chancers

Hopefully we're being shrewd, but it's January and we've just been taken over, was always going to have to pay slightly over the odds

I’d be worried if he did get mugged off. He knows this part of the game inside out.
We are in such a good place! Gallen the talent spotter, a great manager and his coaches plus an agent as a chairman!!
Powerful combination.

I bet it’s not over yet…from what the press have been like of late…one story get published then it changes a few days later. Wait and see where we’re at by midweek next week. 😉

All part of strong negotiations

Great …don’t be intimidated just because they think we got money ..tell em to do one 👊

Why do people think that just because the owner is rich, we automatically get all his money to spend? Roland was mega rich!
They have made it clear that they will run the club carefully and that means not paying over the odds. I'm fine with that.

Rather we signed Eisa

We arent the richest in england not even rich

The owners know his worth – it’s called business

Refusing to pay £1m on a 27 year old striker unproven in this league and out of contract in the Summer? Good business from the owners. Means they aren’t going to throw money around and take risks.

As a businessman who formally paid his mortgage as a Football Agent, I’m sure Mr Southall has an idea about the Gamesmanship behind player transfers/negotiations, as evidenced with Gnanduillet & our own Lyle Taylor. 5 year deal for Lord Bowyer – YES PLEASE Carry on Mr Chairman👍

There is a point at which we have to stop, one for our finances, and two for the rules that govern them. Much rather get 2 or 3 players for about the same amount than just the one, especially in the current situation.

We mustn’t let people exploit us. Have to make it clear we mean business #cafc

One Reply to “Vital Debate: Were Charlton right to cancel this transfer deal?”