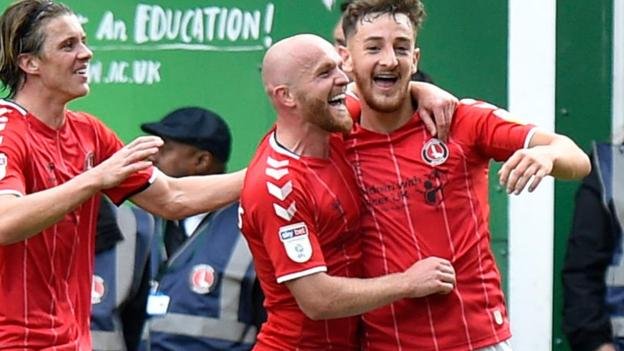 Charlton took down promotion favourites Leeds United in a 1-0 victory that sees us return to the playoff spots and tied on points with our opponents.

It was a dream debut for summer signing Macauley Bonne, with the former Leyton Orient striker claiming the only goal in a fantastic result for the Addicks and not many people predicted that before the game!

Bonne was one of two changes to Lee Bowyer’s side that took on Wigan Athletic last weekend. The Zimbabwe international replaced Tomer Hemed up front and Chris Solly came in for Deji Oshilaja at right back.

As soon as the whistle was blown, Leeds were straight on the attack, forcing three corners in the space of two minutes. Charlton keeper Dillon Phillips was forced into two good saves to deny certain goals from the relentless set pieces.

The Addicks were grateful for Jonathan Leko, as he blocked Ezgjan Alioski’s shot in the 23rd minute, which looked certain to creep into the bottom corner.

After the early pressure, Lee Bowyer’s men grew into the game and took the lead in the 32nd minute from Bonne. The striker did brilliantly down the right side to win a corner. Josh Cullen’s delivery was met by Tom Lockyer on the right foot, before hitting Leeds keeper Casilla, then Stuart Dallas before rolling into bottom corner for 1-0. Bonne questionably claimed the goal when I’m certain that it’s an own goal from Dallas.

Charlton contained Leeds for the rest of the half, with Helder Costa’s volley coming closest as it flew over the crossbar.

Marcelo Bielsa made a double substitution at half time with Arsenal loanee Eddie Nketiah and midfielder Adam Forshaw coming on for Jamie Shackleton and Alioski.

Josh Cullen’s free kick was the first chance of the half, but it was comfortably saved by Casilla.

Leeds came ridiculously close on a number of occasions, with Nketiah finding himself free at the back post with five minutes to go, but he dragged his effort wide.

We may have had fewer shots and possession, but we held on for an unbelievable result against Leeds!

Our players are absolute warriors. Our defenders were superb, our midfield bossed the middle of the field and full credit to Macauley Bonne on his full debut. Although I don’t think it was his goal to claim, he took his chance to shine brilliantly and his work ethic was superb.

This was such an important win for us. Going into our next few games, we needed to get a result to boost the squad’s confidence. The fact that we’ve beaten arguably the best team in the league, it shows that we can beat anyone. The team will be on top of the world right now and going into games against Swansea and Fulham, we can believe we can take down anyone in this league.

I’m buzzing for Swansea on Wednesday, bring it on!